Ever since coffee was made famous through its earliest consumers, the beverage has touched new heights of popularity with each passing decade. While the region of its origin remains under dispute, there is no doubt in anyone’s mind that everybody’s favorite java is one of the most famous beverages on the planet. That’s where the quest for famous coffee shop franchises of the world starts for people who love their daily cup of coffee.

From the U.S. to Europe, and from Africa to Australia, coffee remains one of the most favorite drinks of a large part of the population. That’s something which has been getting more and more traction with time. That is why it is no wonder to see several coffee shops opening up all around the world. Whether it’s a quaint little place that’s owned by a family or a modern space that is the representation of a corporation’s best services, you are almost sure to find cafes or coffee shop franchise at every corner in a region where coffee is deemed as the preferred beverage.

Talking about famous coffee shop franchises of the world and leaving Starbucks out of the conversation is akin to discussing the solar system and forgetting to mention the sun. Yes, Starbucks is that important to the modern coffee industry.

Holding no less than 29,865 locations in the world, Starbucks’ outreach remains impossible to surpass by even the most famous coffee shop chains. Whether it’s a corporate-culture friendly nation such as the U.S. or a country that’s as opposed to globalization as China, Starbucks has established its presence all over the planet. At the time of writing, the company operates thousands of locations over an impressive roster of 78 countries, which easily set Starbucks apart from its competitors.

Known as one of the most sought after coffee shop franchise in the world, Starbucks has also forayed into selling custom coffee bags with its iconic green logo on it. With it, the coffee company has also started selling its coffee makers. It is also collaborating with other coffee machine manufacturers such as Keurig to sell its flavors in the form of coffee pods. What makes this even more impressive is that this success was obtained over approximately 40 years, since the company was launched in 1971.

All in all, Starbucks is the definitive example of what a famous coffee shop franchise of the world look like in their prime. If you love coffee, then you must have had – or will have – Starbucks at least once in your life. Those are the rules set up by the largest coffee franchise in the world. But here’s where you might need to learn that while Starbucks is open to franchising in the rest of the world, the coffee company prefers to own all its locations in regions such as the U.S. and Canada.

Check out “5 Most Popular Coffee Drinks in America” to see how Starbucks and other coffee franchises around the U.S. are attracting customers with these specialized coffee drinks.

Founded in 1950, Dunkin’ (formerly Dunkin’ Donuts) is the second-largest coffee shop franchise in the world. Operating for almost 70 years, the company has grown from being an exclusively American brand to expand its operations to over 36 countries. While that might not be as impressive as the stats mentioned above presented by Starbucks, it is something that has not been achieved by another coffee shop.

While the company rebranded itself to be known as just “Dunkin’” in early 2019, many customers still recognize the brand by its full name. The decision to drop “donuts” from its brand name was taken to make the coffee shop more recognizable for its main offerings of the beverage as well as its menu of other fast food items. The mention of “donuts” seemed to have limited the customers’ perception of the brand.

Today, Dunkin’ owns over 12,000 locations all over the world, cementing its status as one of the most famous coffee shop franchise of the world. With that, the coffee company has also collaborated with coffee machine manufacturers such as Keurig to provide its signature flavors to home consumers in the form of its coffee pods.

Apart from coffee, Dunkin’ is known as a major provider of snacks and fast food items. From breakfast sandwiches to crepes, and from wraps to donuts, the company is known for providing signature flavors in each kind of snack that it offers to its consumers. This has helped establish itself as one of the most famous coffee shop chains.

Now that it has dropped “donuts” from its name, the company is not only moving to establish itself as a primary provider of coffee-based drinks. It is also establishing itself as being front and center of developing fast food items, such as the Beyond Meat breakfast sandwich that is made out of plant-based protein.

With these initiatives, Dunkin’ is getting started to give stiff competition to Starbucks. While it might not be able to beat it in coffee offerings right away, it does have a stronger value proposition now as compared to what it had a few years ago.

Looking to see what else could be sold inside a coffee shop? Check out “Things to Sell in a Coffee Shop Besides Coffee” for more.

While those in the U.S. might not prefer a Tim Hortons to a Starbucks or Dunkin’, coffee drinkers from Canada know the company as one of the most popular coffee shop franchise. Launched in 1964, Tim Hortons is the second-oldest of the three companies mentioned in this list. But instead of falling in the middle between Starbucks and Dunkin’ in terms of overall presence, it ranks third on this list with over 4,800 restaurants in 14 countries.

The Ontario-based company identified American fast-food chain Wendy’s as its parent organization from 1995-2006. The title was then taken from the U.S. brand and handled by Restaurant Brands International, which is co-owned by Burger King and Tim Hortons itself.

With popular and readily available franchising options, Tim Hortons is easily branded as one of the most famous coffee shop franchise in the world. Its different beverages that are spread across various flavor profiles and price points also make it quite accessible and beneficial for its customers.

From French vanilla to mocha latte, and cappuccino to hot chocolate, Tim Hortons has different beverage options that are highly enjoyed by those who frequent the establishment. While these individuals are mostly Canadians, the company’s presence in other countries also adds to the overall popularity that is enjoyed by its customer base.

Apart from being known for its signature red cup, Tim Hortons also offers its flavor options in the form of ready to brew home blends. This also allows customers to enjoy their favorite flavors without having to set foot out of their homes. Between these three immensely popular coffee shop franchises, those who love sipping on a cup of joe have a variety of options to consume their favorite drink.

Whether you are looking for franchising options or just a drink from a famous coffee shop, these could fulfill both purposes in a very proficient manner from any part of the world. If you want to explore more options, then you can look for other popular coffee shops as well. But you would find that these three brands remain on the top three in many similar lists curated by coffee enthusiasts.

Thank you for reading! Let us know in the comments below which franchise is your preferred in the mornings. Be sure to check out other content to enhance your coffee menu like “Winter Coffee Drinks That Are Perfect in The Cold” or even “3 Alcoholic Coffee Drinks You Have to Try“. 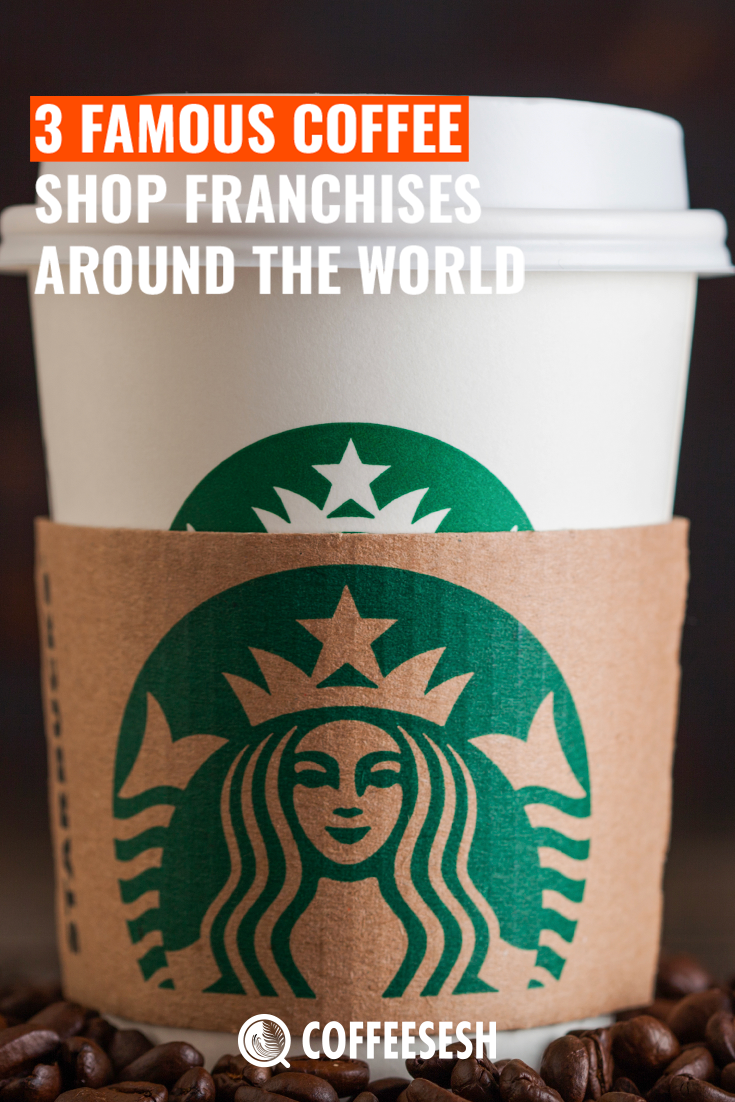