There are some rumors swirling around about coffee, and we just have to clear them up! Some people say that coffee stunts your growth, or that it can make you lose lots of weight, but are the rumors true?

Today we’re going to talk about some of those rumors and clear up any misconceptions you may have about coffee. That way you can enjoy your cup of morning joe without worrying that it’s going to make you shorter.

Let’s jump right into the myth-debunking!

Was it just us, or did your mom tell you coffee would stunt your growth to get you to stop drinking when you were a teenager? It didn’t really work on us… We had a full-blown coffee addiction back then, and we still do now!

Luckily, the idea that coffee can stunt your growth is a total myth. Researchers monitored a group of young women during adolescence to see if their caffeine intake would affect their bone health and growth, and spoiler alert, it didn’t! Teens with a caramel macchiato habit will be glad to know that they aren’t putting their health at risk by indulging. (Phew!) To learn more about how much caffeine may be too much caffeine for yourself, check out this article here.

A lot of people think that decaf coffee doesn’t have any caffeine, and we don’t blame them! The name “decaffeinated coffee” implies that all of the caffeine has been removed from the coffee beans. But sadly, that’s not the case.

The average cup of decaf coffee has between 2 and 12 mg of caffeine. So if you limit yourself to just a few cups, you won’t be getting too much caffeine.

To give you some context, the average espresso shot has 77 mg of caffeine. So just drinking two of those decaf coffees would be like drinking an espresso shot!

If you’re highly sensitive to caffeine or heading off to bed in a few hours, definitely don’t get yourself a cup of decaf from Starbucks—stick to herbal tea instead, like Celestial Seasoning’s Sleepy Time Tea.

To learn more about decaf coffee, including its benefits, check out our other articles on Coffee Sesh!

Caffeine is a stimulant, and it’s one of the main ingredients in coffee, so coffee should, in theory, give you more energy. But if you’re a regular coffee drinker, sadly it won’t have that effect on you anymore!

Caffeine increases the amount of dopamine in your brain, so it makes you feel good and increases your alertness. But if you consume caffeine on a regular basis, your body can get so used to that dopamine hit that it needs it just to function. So over time, that dopamine hit won’t make you feel extra energized—it will just get you back to your normal, baseline levels of energy.

So your morning cup of coffee won’t give you any more energy than you would’ve had if you weren’t a regular coffee drinker. What a bummer! Good thing we drink coffee for the taste and not the energy boost.

During the roasting process, some of the caffeine in coffee actually turns into a gas. It’s heat that causes the caffeine to turn to gas and dissipate, so coffee beans that are roasted for longer amounts of time lose more of their caffeine.

So, because dark roasts are roasted for much more time than light roasts, they have lower caffeine content. Learn more about the components of different coffee roasts here!

Isn’t it weird that a rich, smoky cup of Guatemalan dark roast has less caffeine than Geisha coffee, which tastes like Earl Grey or Jasmine tea? Guess you can’t trust your nose!

Caffeine is in pretty much every diet pill. It’s supposed to rev up your metabolism and curb your appetite, helping you lose weight. But the jury’s still out on this one—there isn’t a lot of scientific evidence to back it up.

Even if coffee does slightly boost your metabolism, it’s probably still not worth drinking for weight loss purposes, unless you can down it black. Cream and sugar add a significant amount of calories to your cup, canceling out any metabolism-boosting effects that the coffee might have.

What do you think about these 5 coffee myths? Did you used to believe any of them? Let us know in the comments section below!

Join our community of coffee lovers on Instagram today! Also if you want to learn more about making coffee from people just like you, be sure to join our private Facebook group here at Daily Coffee Talk. You’ll be able to learn how to brew, how to roast and most importantly how to enjoy the perfect cup of coffee!

Thanks for reading, we’ll brew ya later! ☕️ 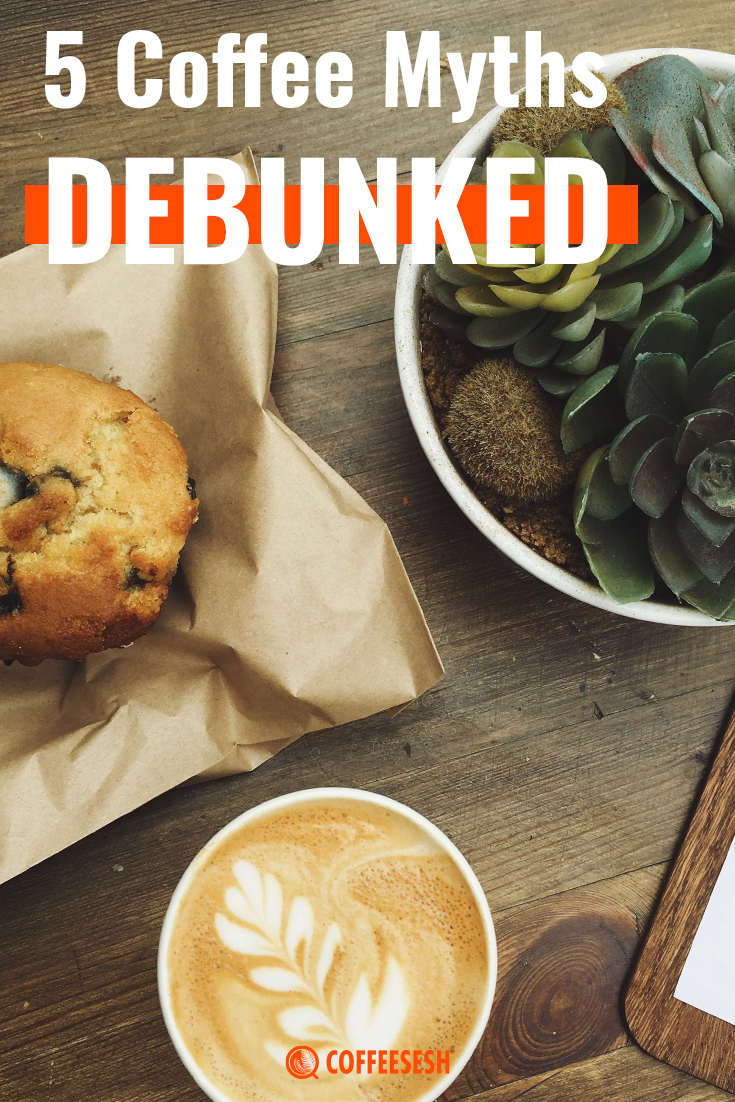 Why Coffee is Bad for You (Addiction and Other Side Effects)

Coffee Tips: How Much Caffeine is in Instant Coffee?

5 Most Popular Coffee in America – What Coffee Lovers Drink

Interesting Facts About Coffee Cultures Around the World