Does coffee follow the same pattern as wine, whiskey, and violins? Does it get better with age? According to the latest trends in the coffee world, a lot of people believe it does. They claim that properly aged coffee is delicious, with a full taste, sweet, and syrupy. Others, however, argue that it is just a hoax and a method for coffee sellers to rid themselves of the old stock by a clever marketing ploy. Let’s see which opinion is correct.

Back in a day, a vast percentage of all coffee consumed in Europe came from the port of Mocha in Yemen, a part of the Ottoman Empire at the time. Travel time to Europe was lengthy, with ships going all the way around Africa and Cape of Good Hope. It often took months to reach even Spanish ports, not to mention English, Dutch, or German ones. Before loading, coffee beans often spent months sitting in port warehouses, drying up in a hot desert climate. Once loaded on ships, beans were exposed to extremely humid conditions of a long sea voyage. By the time they arrived in Europe, they have undergone quite a few changes. The salty air provided for a distinct taste coffee had in those days. This was even more true for beans coming from India and Dutch Indonesia, which provided the rest of the European coffee supply.

But as time went by, better and faster ships were made. New ships meant shorter transport times and fresh coffee was readily available everywhere, and the percentage of aged coffee diminished to the point that the practice was almost completely abandoned.

Several coffee producers revived the practice in recent years, drawing a parallel with wine and claiming that coffee must be aged to reach its full potential. But, like with wine, not all coffee ages well. A bad wine will still be bad after ten years. A violin made by Stradivarius may sound heavenly after three centuries, but a violin made from lesser-quality materials and by a worker in a sweatshop would probably turn to dust in half that time. The same goes for coffee beans. Some can improve with aging; others will become stale. The secret is the retention of oils in beans, which are essential for the taste and flavor of the coffee.

The other issue is the length of aging. Most experts agree that one year is the absolute maximum for aging. After that, coffee starts losing oils, resulting in dried beans with no flavor. While some producers are selling coffee aged for six or eight or 12 or some other arbitrary number of years, we wouldn’t recommend you drink it.

Beans used in aging come mostly from South America, but recently Sumatra and Sulawesi regions have started aging their beans before shipping them out. Coffee grown in these regions is excellent for aging and provides the best results, unlike some other beans which don’t stand the process.

Aging coffee is a careful process, involving regularly turning beans to prevent mold and rot. Rotating beans ensures that exposure to air humidity is even. Most beans are aged where they are harvested. Aging on higher elevations tends to provide better results because of the moisture and temperature and more stable. Once the process is finished, the coffee is packed and shipped to roasters.

The other approach, which is gaining popularity, is for the roasters to buy green beans and age them themselves. This way, they can control the process and get the results they want, instead of relying on farmers. Since most roasters lack the space for aging on a flat surface, they have created a method called barrel aging. Beans are placed in barrels and left for some time. From time to time, coffee is tested until the desired flavor is achieved and then roasted. Usually, barrel-aged coffee is French roasted (or some other version of dark roast), especially for blends of coffee coming from several different regions. Some coffee aficionados prefer lighter roast for single-region aged coffee, to accentuate the innate flavors of the area.

If coffee beans have been aged properly, they have retained their oils and their full flavor, tempered by the aging process that enriched the taste. Describing the taste would be impossible unless we are talking about a single brand since roasters take great pride in adding unique features to their process to create a flavor only they can replicate. This is one of the best things about aged coffee since there are so many brands with a unique taste to choose from, even though they may have started with the same beans. Stale coffee, on the other hand, has almost no flavor, and drinking it is akin to drinking bitter, brown water.

There are many products on the market labeled aged coffee but are in fact beans that had stayed too long in a warehouse somewhere. The recent hype about aged coffee has created an opportunity for dishonest manufacturers to sell these beans and even charge a premium for them. This has led to people resenting aged coffee since they were sold stale beans with no flavor. That is why it is prudent to only buy from labels you can trust and are sure they aren’t trying to unload their expired stock on the unsuspecting customers.

Thank you for reading! Are you a coffee lover? Of course, you are! Become a part of our exclusive Coffee Sesh Facebook Group, Daily Coffee Talk, and join our expanding coffee community. And don’t forget— we’re on Pinterest and Instagram! Check us out for daily coffee content. 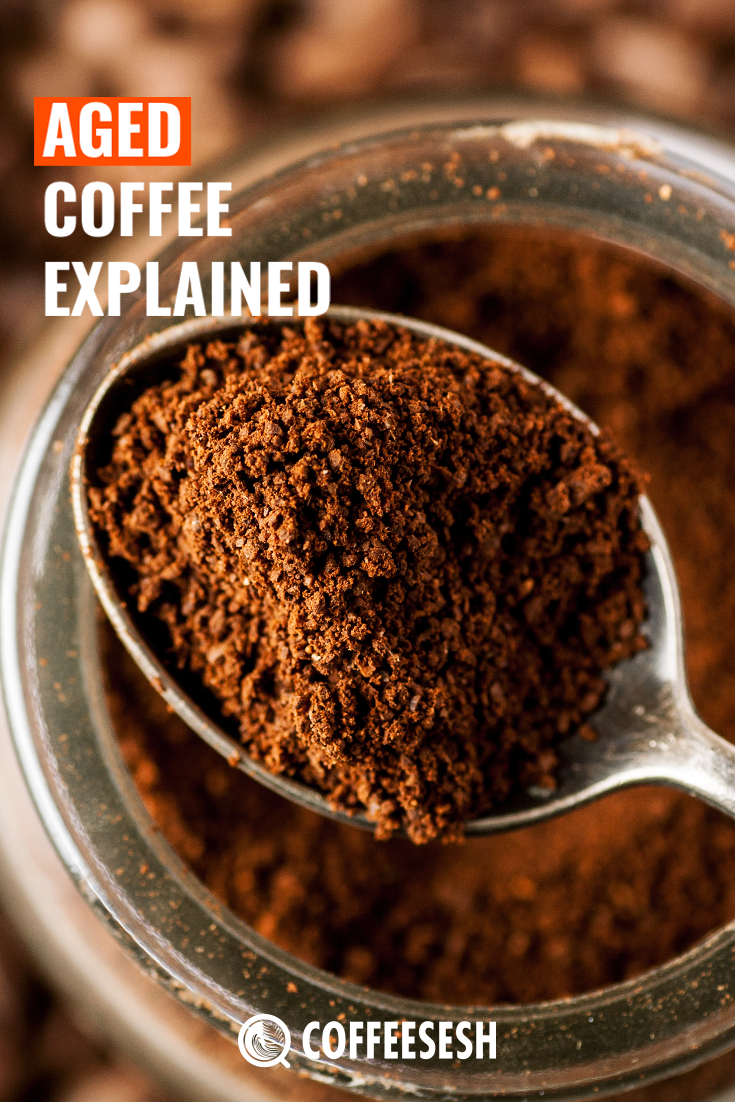 What is a frappuccino?