It is an obvious fact that coffee beans grown in different parts of the world will have their own unique idiosyncrasies and subtleties. But all of the earth’s coffee can broadly be categorized into two categories: arabica and robusta. Two-thirds of all coffee that is produced on the earth is made from arabica beans. However, if you like your coffee dark roasted, or you’re one of those still trying to make the switch from instant coffee, you’re probably consuming robusta beans more frequently. Both, Arabica and Robusta have various merit and demerits for consumption. Given the sheer dominance of the former in the coffee industry, this article only briefly focuses on this broad distinction. So we will see the differences between Arabica and Colombian coffee.

The main objective of this article is to discuss the nature of Arabica beans, broadly. These beans come from the South American country of Colombia, which is the third-largest exporter of coffee among all nations. Widely considered to be the home of some of the best coffee in this world, Colombian coffee is a step above the average cup o’ Joe available out there.

Even within Arabica, Colombian coffee is renowned, especially for its delicious flavors and silky texture. These are two of many important features within its multi-faceted personality. We’ll go over the differences between Arabica coffee in general, and how it compares to one of the best in its own category. Spoiler: Colombian coffee wins. But you probably knew that, so we’ll go over what exactly makes java from this region so appealing. To find out more about Arabica, Robusta, and Colombian coffee, read on.

What is the Difference Between Arabica and Robusta Coffee?

75% of all coffee beans produced in the world are of the Arabica type, which is of superior quality to Robusta beans. Arabica beans were named after Arabia. It is a region that can boast of being one of the earliest to adopt coffee as a beverage of tradition! Arabica beans need sufficient altitude, ideal temperature conditions, such as rainfall and humidity, and volcanic soil, to maximize their quality. Ethiopia was one of the first countries where Arabica became popular. Today, these beans are grown in locations that experience weather conditions ideal for coffee growth. Many of them are located in South America.

Arabica beans are adored for their subtle flavors and comparatively milder notes that include cinnamon, vanilla, and saffron. However, the milder taste is a result of Arabica beans having far less caffeine as compared to its alternative. In fact, the actual ratio is that Arabica contains only half the caffeine of Robusta. This has the added benefit that these beans can be roasted beyond the signature ‘second crack’ without turning overly bitter. The lost caffeine content is replaced by high sugar content. However, if consumed without too much cream or sugar, one need not worry about adding too many calories. Arabica is also very rich in antioxidants that are beneficial for health.

Robusta beans comprise the remaining one-fourth of the world’s coffee output. Often, these beans are used in dark roasted coffee beans. The subtleties of flavors in coffee beans disappear, and it is hard to differentiate between good and bad quality beans. These are the fancy ‘French’, ‘Italian’, or ‘Spanish’ roasts that are some of the darkest coffees available.

Another reason Robusta beans are considered inferior is that they are often grown in places that do not have weather conditions suitable for growing better quality coffee. Thirdly, they could have also undergone some type of defect in the process of production. The massive market for dark roasted coffees is keeping robusta producing nations alive. Producers in these nations, under the pressures of poverty and inequality, generally do not care much for quality. As such, robusta beans feature prominently in popular instant coffee brands such as Nescafe.

In many ways, Robusta is the opposite of Arabica. They have almost doubled its caffeine content, but only half of its sugar volume. It has a much stronger bitter, rubbery taste. That helps during its various stages of growth since scavenging insects are turned off by the bitter caffeine. This is a big reason why Robusta can be grown almost anywhere. Although well-processed robusta beans can make for some delightful coffee, this is rare, and most robusta is cheaper than arabica due to its lower quality.

What’s the Difference Between Arabica and Colombian Coffee?

Colombian coffee is just coffee that has been grown in Colombia, a country that primarily produces Arabica beans. Most coffee-producing nations focus on either one of Arabica or Robusta. Although Brazil, the largest exporter of coffee in the world, is a notable exception. But by and large, Arabica and Colombian coffee share many traditional attributes. However, there are some factors that make Colombian coffee special. We laid out the basics of Arabica coffee generally in the previous section, and this one discusses Colombian coffee in comparison.

The nation of Colombia has a lot going for its farmers when it comes to producing coffee. It has been blessed with all the ideal weather and geographical conditions needed for growing high-quality coffee. It experiences the required amount of rainfall, which needs to be at least 200cm, or 80 inches, annually. Much of Colombia’s terrain is hilly or terraced, and at a considerable height above sea level. It also possesses the essential volcanic soil that is conducive to coffee growth. Additionally, every bean in Colombia is handpicked, adding a personalized touch to the process. Lastly, Colombian coffee benefits hugely from a practice that is widely adopted for Arabica beans in general. This process is called wet processing.

Once fermentation ends, farmers have two options. They can either process the beans by washing them with water, or they can leave them out to dry. The second method has been the conventionally-used method, due to the lack of additional equipment required. Without suitable weather conditions, dry processing can damage coffee beans by causing them to crack. When done properly, dry processing can often give you a more fruity texture to your coffee, but because robusta beans are generally grown in adverse conditions, this does not transpire.

To understand the benefit of wet processing, we first need to know how coffee beans are derived. They come from what is called the ‘cherry pit’ and do not sprout from the earth as ready to roast beans. Wet processing removes all the cherry and additional fruity content from the bean. That is letting its inherent flavors shine through in later stages. The wet processing may also be why Arabica beans, in general, are bigger than robusta beans.

Methods of dry processing can vary between producers. Some allow their beans to sit for a while after washing, while others prefer to simply dry them soon after. However, this step lends Arabica and Colombian coffee distinct fruity and floral flavors that are, unfortunately, not found in robusta beans due to improper practices.

Colombian coffee, like Arabica, has regularly been described as having a medium body and a well-balanced flavor. It incorporates the strong taste of coffee, as well as more nuanced blends of notes, such as those of berries, caramel, sugar, cardamom, or others. They also have irresistible aromas that are often a mixture of spices, fruits, and citrus. Coffee from this region comprises almost 12% of all such beverages consumed in the world. It is a thriving industry that employs close to a million people, all adhering to the same strict standard of quality that makes Colombian coffee so special.

So, What Should I Choose?

Arabica and Robusta coffee plants dominate the global industry for the beverage today. While Robusta is a lower-grade coffee that is often grown in less hospitable conditions, Arabica coffee is grown only in the most conducive environments. It produces well-balanced coffee that is not too harsh and can be truly appreciated for its complexities and nuances.

One of the most enjoyable Arabica coffees is Colombian coffee, which is simply coffee grown in the country of the same name. This country, with its ideal weather conditions, hand-picking, and other specialized methods, produces some of the world’s most exciting coffee. With fruity, and floral flavors that can sometimes be combined with an earthiness to accompany the taste of caffeine, Colombian coffee is a broad categorization for many fine coffees that are produced in the region. If you’re looking for high-quality coffee that few other countries can match, look no further, and enjoy. 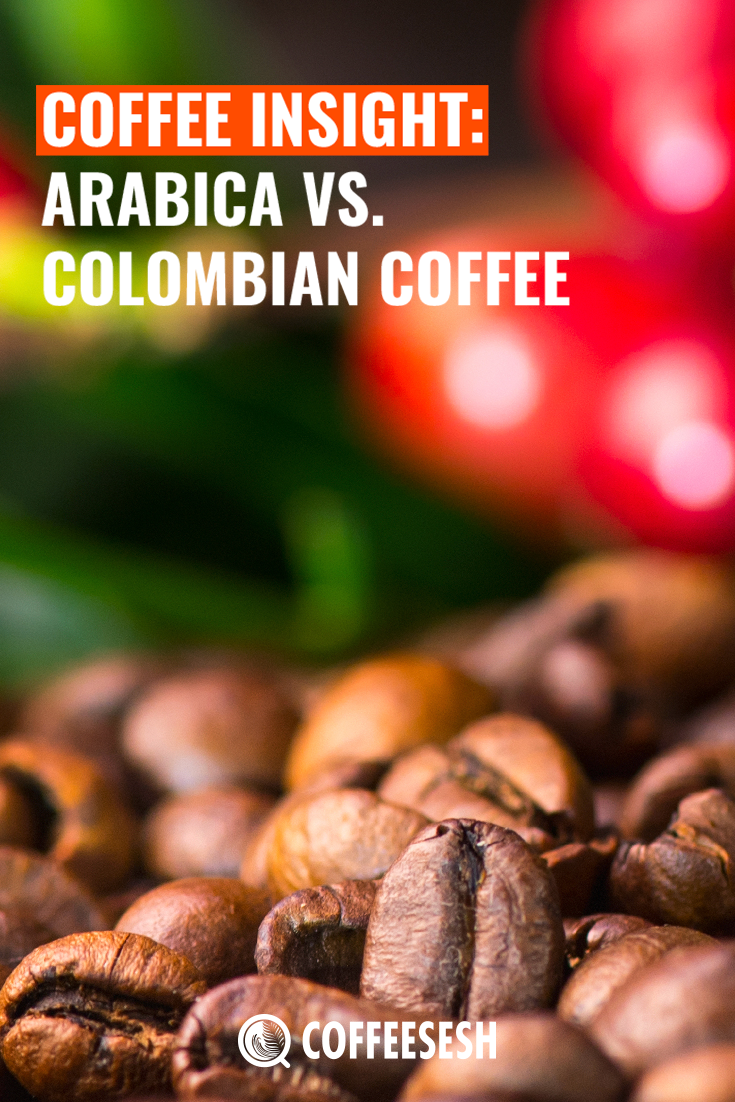 How Many Carbs Are In Coffee

How Much Caffeine Is In: Tea, Soda, Coffee & More

Why Does Coffee Make Me Sleepy

Caffeine in coffee vs tea