Despite popular opinion, keeping your coffee supply in the fridge is not the best solution. One of the biggest enemies of coffee’s longevity is moisture and fridges tend to have a lot of it. Once porous roasted coffee beans are exposed to humid conditions, they start to deteriorate rapidly. Very rapidly. This results in them losing the flavor and resulting in a bland cup of joe. Yuck!

But the the question still stands, can you freeze brewed coffee?

To make matters worse, taking a container in and out of the fridge to make coffee several times a day increases the amount of condensation by creating temperature fluctuations. Beans can even take in some of the food odors they are surrounded with, if not sealed properly. But what about freezing coffee, especially brewed one?

For a long time freezing coffee was considered a bad idea, for the same reasons as keeping it in the fridge. Recently, however, some dissenting voices had started to challenge that opinion. This has led to some serious disputes among the leading experts in the coffee community. Some of the claimed that even coffee sealed in an air-tight container will increase its moisture content and therefore lose at least some of its taste.

The fact that freezing coffee was a major no-no was taken for granted. This was despite the fact that almost all other kinds of food are regularly frozen on its way to the customers in order to increase its shelf life. So, why is coffee an exception? As it turns out, it really isn’t.

Here are several reasons why people resort to freezing coffee despite the alleged risks. Some buy coffee in bulk to use up before “best by” date expires. That means they have to keep it in the freezer. People who have several favorite brands are especially prone to doing this since they couldn’t possibly drink all five or six (or ten or fifteen) bags of various coffee brands before the expiration date.

However, of course there are those coffee lovers who regularly buy smaller quantities of coffee and never have to worry about a stale cup of morning coffee. In fact, they probably have all their coffee neatly listed in a spreadsheet, ordered by “best by” dates. The rest of us are left with the freezer as the simplest solution. So, just how doomed are you for committing on this style of consumption?

Ken Fox and Jim Schulman are well-known and respected coffee experts. Fox is the founder of one of the first online coffee shops in Seattle. Schulman is a founding member of the Specialty Coffee Association of America (SCAA). They have designed an experiment aimed at finally deciding just how freezing affects coffee. The test subject was Sidamo Werka, known for its fruity flavor.

Fox and Schulman believed that its taste is perfect for detecting even the slightest changes due to freezing. The first batch of roasted beans was placed in air-tight plastic bags and frozen for a period of one month. The second batch spent four months in the freezer. Both were compared by Fox and Schulman to the third batch, fresh beans roasted just before the consumption. In a triangle cupping test, neither of them could detect any difference between frozen and fresh beans.

While there are some explanations that may offer a different conclusion, most people agree with Fox and Schulman’s conclusion. Storing coffee in a freezer in a suitable container for up to four months has no detrimental effects on its flavor. Say what?

Once the freezing roasted coffee myth was debunked, people also started wondering about freezing ground coffee. Since it has an even shorter shelf life than roasted beans. Is it possible to grind a week’s worth of coffee during the weekend and just chuck it into the freezer. Is it possible to do this by avoiding the need to use your grinder every morning to get that sweet caffeine kick-start? Purists will probably call it sacrilege.

As far as we can tell, there are no adverse effects of freezing ground coffee. That is provided you do it properly by sealing it in an air-tight container before placing it in the freezer.

Freezing and thawing a brew is bound to have some chemical consequences. This will reflect poorly on the flavor of the coffee. While it probably won’t matter when doing it in small amounts, an ice cube or when frozen coffee is just one of several ingredients in a dessert. However, doing it for the sake of drinking it in a few days will most likely taste horribly.

And what would be the purpose of such an endeavor? You accidentally made a gallon of coffee and you don’t want it to go to waste? There is leftover coffee after a party? And let’s not even get into the logistic of it. Will you simply leave a frozen chunk of coffee thawing in a pot on your kitchen counter? Or perhaps, use a microwave and simplify the process by reheating it at the same time? The first option seems like it would take ages. The second is dreadful enough to give nightmares to any coffee aficionado for weeks. In fact, let’s forget it was ever mentioned. Some things should never be discussed in society and preparing a cup of coffee in a microwave is definitely one of them.

Can You Freeze Brewed Coffee?

The final answer to this question is yes, you can. Should you freeze brewed coffee? Well, it is really up to you. There are circumstances that fully justify that practice, like making coffee ice cubes or some delicious desserts. That about sums up the right reasons for freezing brewed coffee. Anything else should be avoided, even if it is the last cup of your favorite brand and your roaster just informed you that they won’t be getting a new shipment for three months. Just spill it in the sink if you can’t drink it, you will only be disappointed later when you take it out of the freezer. 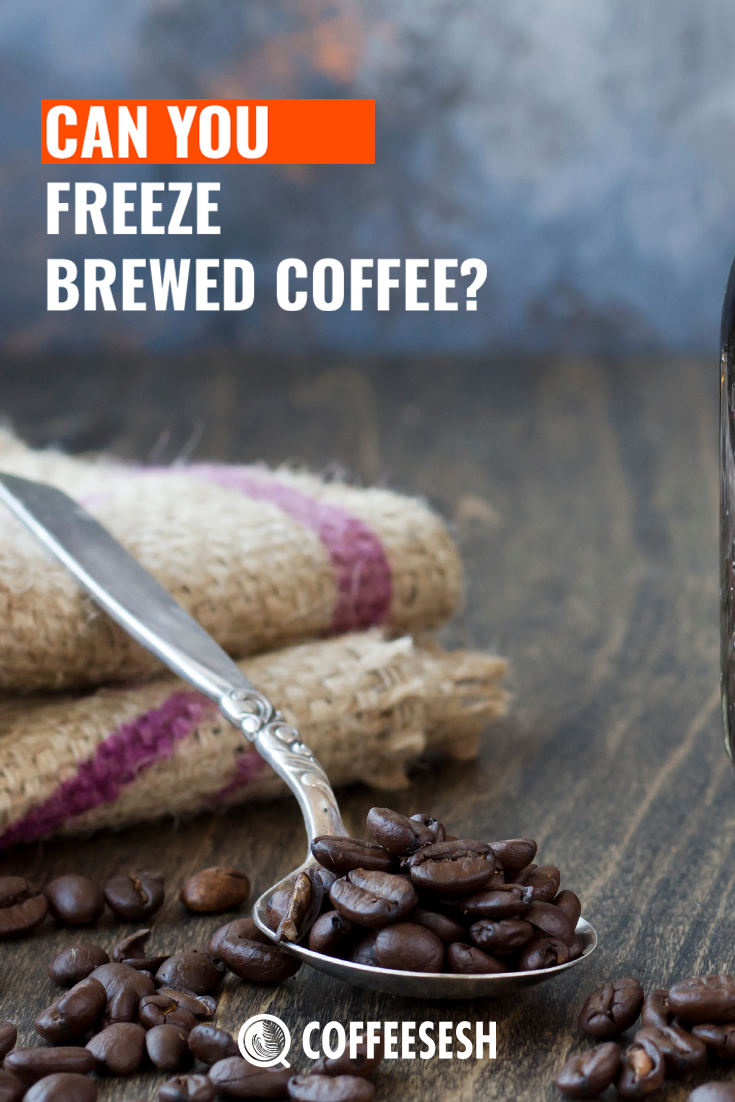 Best Coffee for Cold Brew on The Market

Different Types of Coffee Filters on the market