The Cappuccino was once considered extravagant and even outlandish coffee in the United States. Today, with a third-wave of coffee like Flat White & Cortado in a full swing and showing no signs of slowing down, it has become accepted in coffee shops all over the country. As the popularity of Cappuccino grew, similar, but less known coffee drinks also started appearing.

Today, we have several choices when it comes to espresso with milk. Latte is the best-known, but far from the only option. Words like Cortado, Flat white, and Macchiato have entered the baristas’ vocabulary some time ago, but still, there are plenty of coffee lovers out there who get confused about what exactly is the difference between these drinks. Let us try and explain Flat White & Cortado for starters.

The origin of Flat White is hotly disputed between coffee aficionados of Australia and New Zealand, with each group claiming that the drink was invented in their country. What is known is that the drink appeared in cafes in both countries sometimes during the 1980s. Australians claim that the drink was popularized because of the way heat and change of diet affect local cows, causing their milk losing the ability to froth.

That is why their Cappuccinos turned out flat and the new drink was born. Kiwis tell a similar story, saying that Flat White was born out of a failed Cappuccino attempt. Be that as it may, the origin story isn’t that relevant to our enjoyment of the drink. Flat White combines espresso with a fine, velvety milk microfoam.

Although the milk is steamed, it isn’t as frothy as in some other drinks and there is less of it, allowing the taste of espresso to dominate each mouthful. The crema is mixed into the microfoam, creating a uniformed layer, which settles to a thickness of about five millimeters. This makes Flat White a popular drink for various latte art drawings.

Learn how to froth your milk for your coffee drinks in “How to Froth Milk for Cappuccinos“.

Cortado in Spanish means “cut” and is used for any coffee that has been cut with milk, as opposed to “solo Corto”, which is black coffee. The word is similar in meaning with Italian macchiato or French noisette, all denoting coffee with milk. Depending on where you are, Cordite in the United States is also known as Gibraltar, after a glass that is served in, but you will rarely hear it called that way from the West Coast.

It consists of a double shot of espresso and an ounce or two of steamed milk. This amount of milk reduces the acidity in coffee, resulting in a fairly sweet drink. The coffee – milk ratio in a cortado is similar to a cappuccino, the difference is in the temperature of the milk. Cappuccino is usually served a little colder, so it can be drunk immediately, while cortado is meant to cool off a bit.

Be sure to also check out our ongoing series “Coffee Insight: Latte VS Flat White“.

For many people, these differences are immaterial and only very experienced coffee drinkers will be able to tell Flat White and Cortado apart solely on taste. Visually, the task is much easier, and not just by the difference in tableware.

Are you a coffee lover? Of course, you are! Become a part of our exclusive Coffee Sesh Facebook Group, Daily Coffee Talk, and join our expanding coffee community. And don’t forget— we’re on Pinterest and Instagram! Check us out for daily coffee content.

Be sure to also read similar topics from us like “Best Milk For Frothing” or “8 Popular Coffee Drinks in Europe“.

Thank you for reading! We’ll brew ya later!! ☕️ 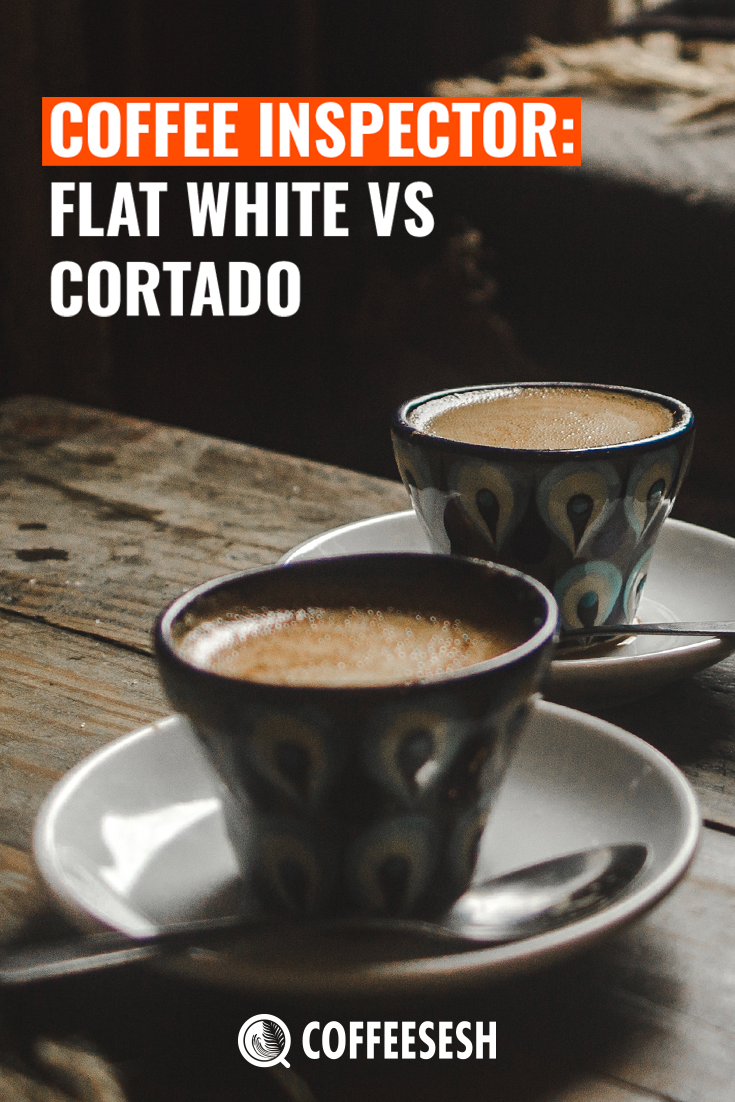 Is Coffee With Cream And Sugar Bad For You

How Much Caffeine Is In: Tea, Soda, Coffee & More

Coffee and Health: Why is Caffeine Bad During Pregnancy?