From students and professionals to stay-at-home parents, everyone has heard the ubiquitous phrase “wake up and smell the coffee” at least once in their life. The reason behind that is quite simple when you think of it.

Coffee is known for energizing its consumers and helping them get out of a drowsy state of mind. It is often associated with the sense of waking up after a long sleep or a short nap alike. The fact that it is one of the most popular sources of caffeine. Which is the most widely consumed central-nervous-system stimulant, only adds to this status. But that’s where it gets interesting.

While coffee is often known as a way to escape sleep and as a solution to get you through a lazy day. It’s not the only thing that it’s capable of. For instance, not many know that coffee and antioxidants have a deep association with each other.

To put this in perspective, Americans consume an average of 1,299 milligrams of antioxidants from their coffee. In comparison, the antioxidant volume consumed from tea stands at 294 milligrams, followed by bananas at 76 milligrams. As you can see from these statistics, coffee comes out as the clear winner in its contribution as an antioxidant source to the American diet.

So what does coffee and antioxidant consumption do for your body, and how exactly does drinking coffee help you with getting your daily dose of healthy compounds? Understanding that these questions are quite tricky, I am here to outline the answers to them, as well as providing important details that pertain to coffee and its association with antioxidants.

What Do Antioxidants Exactly Do for You?

Before you form an opinion about the relation between coffee and antioxidants and sincerely start praising coffee for its ability to pack a high amount of them, it is important that you know exactly what antioxidants do for your body. As the name suggests, antioxidants are necessary to help your body fight the effects of oxidation. This way, your body is protected against any chain reactions that are related to cell damage.

If your body doesn’t get enough antioxidants on a daily basis. It can fall prey to the adverse effects of oxidation. These effects start from a chain reaction through free radicals. Which are compounds that attack many cells and organisms within your body? In the long run, oxidation, free radicals and the resulting damage can cause your body to fall prey to a variety of diseases and conditions. Which include but are not limited to cancer, heart disease, arthritis, stroke, and Parkinson’s disease.

Perhaps the most challenging part about oxidation in the body is that it doesn’t happen as much by risky actions like smoking as it does by regular activities such as consuming everyday food. That is correct, our metabolism can itself produce oxidants – which is why it is extremely important that antioxidants are a part of our diet.

Since coffee is an integral part of our diet, the relation between coffee and antioxidants is important to understand. Knowing about this affiliation lets you consume your coffee with a focus on taking care of your health, and leads you towards practicing a healthier lifestyle.

What Benefits Can You Get by Consuming Coffee Regularly?

Since antioxidants are known for preventing cell damage, and coffee is known as a verifiable source in preventing oxidation, drinking coffee every day could help you steer clear from a variety of diseases and conditions.

While coffee and antioxidants have a deep connection and it could be simply seen. That drinking your regular amount of coffee gives you a noticeable amount of antioxidants to fight against. It is important to know the specific benefits that consuming coffee brings to the table.

Reduces the Risk of Type 2 Diabetes

When it comes to antioxidants, there are different groups of antioxidants that you can consume through your diet. One of these groups is polyphenols, which are considered a very rich source of antioxidants.

Coffee has a certain type of polyphenol, which is called chlorogenic acid. This particular compound has been known for its benefits such as regulating blood sugar. Due to these abilities, coffee can reduce the risk of Type 2 diabetes, which allows you to lead a healthier life just by consuming your favorite beverage on a regular basis.

Polyphenols are also known to protect against certain types of cancers. This means that those who consume coffee regularly could make use of the relation between coffee and antioxidants to protect themselves against such deadly diseases.

This is possible due to the antioxidants’ interactions with cell mechanisms inside our body. Which lets them act as a natural source to protect the body against harmful cell growth. Since an average American drinks three cups of coffee a day. This provides them with a noticeable amount of antioxidants such as polyphenols. This way, all that they have to do in order to reduce the risk of cancer is to keep having their daily cups of joe.

Coffee and antioxidants have also been linked to improved liver health in regular consumers. It has been noted that coffee drinkers on a whole are less likely to be inflicted by diseases such as liver cancer, liver cirrhosis, and fatty liver disease.

Once again, this is all due to coffee’s antioxidant properties. Which helps coffee drinkers get the special molecules. They need on a regular basis in order to protect themselves against liver diseases. This is especially helpful for those who are at a high risk of such diseases.

Reduces the Risk of Parkinson’s Disease

The antioxidants present in coffee help protect against these toxins, and as a result, let coffee drinkers have a lower chance of developing Parkinson’s disease. This also helps in controlling related symptoms such as brain inflammation to a large extent. This is very helpful for those who have a high risk of developing Parkinson’s disease. While it is not a surefire way to protect one against this condition. It is extremely helpful in letting people staying away from their onset.

Among other conditions, the marriage of coffee and antioxidants helps drinkers stay safe against conditions such as stroke. Oxidants could be very harmful to cells that contribute to a healthy brain mechanism. But drinking coffee regularly while also maintaining a healthier lifestyle could help you steer clear of this harmful condition.

Since coffee and its antioxidant properties are known to help against heart disease and cholesterol levels. This also helps in preventing stroke to a significant extent. Overall, the proven relationship between coffee and antioxidants helps against a variety of diseases and conditions. Which lets coffee drinkers enjoy a healthier life by just drinking coffee regularly.

With that being said, it is extremely important that you consume your coffee in a moderate amount and not overdo it. As long as your coffee intake is controlled to the usual amount. You could enjoy the many health benefits that its antioxidant properties bring to the table.

Thank you for reading! Let us know in the comments below if you’re noticing the health benefits to coffee already in your daily intake. Check out “Coffee Enema Explained (Recipe Included)” for a guide to alternative medicine in coffee. 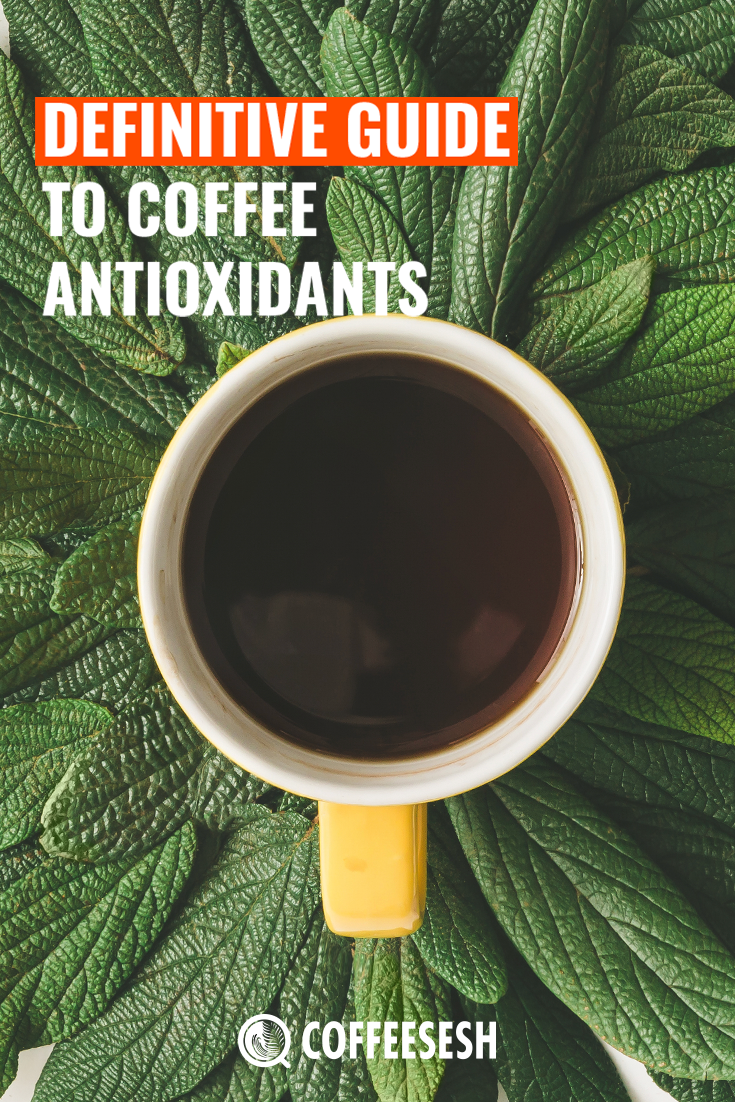 Choose The Right Coffee Filter For You (Complete Guide)

Easy Steps On How To Make Oat Milk At Your Home

How to Grind Coffee Beans for the Perfect Cup

How to Use and Clean French Press With Ease

Your Complete Guide to Making Coffee Ice Cream at Home.

How to Make Coffee Less Bitter?

How to Make a Latte