Some people are dark roast people, and others prefer light roasts. Some people only drink coffee black, and others have it with a boatload of creamer. Everyone has their coffee preferences, just like they have alcohol preferences.

Whether you only have vodka sodas or stick to your six-packs of Stellas, you are bound to have a drink you’re known to forget. But what happens when these two worlds collide, and you mix caffeine and alcohol? That’s what we are here to discuss because there is a lot to consider.

We are not talking vodka versus whiskey, but rather what alcohol consists of. The yeast interacts with different sugars to start fermentation and create some different types of alcohol. A popular form of fermentation produces ethanol, which is in multiple alcoholic beverages.

It is that ethanol that is what causes the side effects of alcohol in the first place. From that, alcohol becomes a “sedative-hypnotic” drug. Drinking too much alcohol cause less drowsiness and slower breathing. Additionally, what alcohol does to your mood creates a fine line between a fun night and having too much.

One of the most important things to know right now is that alcohol is a depressant. This means that alcohol “inhibits the function of the central nervous system,” which affects physical and mental abilities. Reaction times are longer, both physically and mentally. Everything gets a bit fuzzier as more alcohol is consumed. By itself, alcohol is going to take a toll on the body in an obvious way.

What Happens When Alcohol Meets Caffeine

Mixing caffeine and alcohol is pretty standard. Vodka red bulls or other combinations are served in bars all across America without giving it a second thought. A 12 ounce can of Red Bull has 11 mg of caffeine, and a lot of bars put the entire can into one drink. This is primarily a concern for college students, who tend to be a bit more reckless with their mixes.

If those are not up to your ally, or you’ve grown out of that, think of what sodas you mix with alcohol. A rum and coke are going to contain 29 mg of caffeine for every 12 ounces of soda. Some sodas offer caffeine-free options, but not all bars are going to carry them.

On top of that, each drink will have one or more ounces of alcohol in them. You may find yourself mixing caffeine and alcohol a lot more often than you think, especially if you are someone to drink more than one drink while out. All of that before you even grab a coffee at any point in the night.

Check out “How Much Caffeine Is In: Tea, Soda, Coffee & More” for more facts and info on caffeine in all kinds of drinks.

Mixing Caffeine and Alcohol Will Lead You to be More Intoxicated Than You Even Realize.

The CDC says that the caffeine may make a drinker feel more alert than normal, but the alcohol will essentially catch up with them. This could mean that the false confidence that comes with these feelings could lead to bad, reckless decisions.

This happens because alcohol increases adenosine levels, which would make the body tired, but caffeine blocks them from entering your system. Without caffeine, the grogginess alone that comes with alcohol can be an excellent personal indicator to slow down.

Drinking coffee after having one too many drinks will not reduce the effects of alcohol either, contrary to the idea that coffee will sober you up. This is the biggest takeaway from what we have to say on this subject.

Thomas Gould, Ph.D., of Temple University found a lot of issues with this popular approach, finding that it leads to a lot of poor decisions. What will happen is the caffeine will hide the effects of the alcohol, only to encourage more drinking and increase the consequences later.

Eight ounces of coffee contains 70–140 mg of caffeine, which is a lot more caffeine than a Red Bull. Sometimes more or less, depending on several factors, which you can read about here. That means you have to be a lot more cautious about how much you are consuming, both to say safe and to avoid a bad hangover the next day.

The combined dehydrating effects of caffeine and alcohol are a recipe for a rough hangover!

How to Enjoy Alcohol Responsibly

We are not saying that you can never enjoy coffee and alcohol. You must never try to use coffee as a way to mask the effects of alcohol. Also, never forget what alcohol alone will do to your body. One responsible option is coffee cocktails.

Here are a few safe options:

Read up on “6 Coffee Cocktails You Need to Make at Home” to get more in-depth recipes for those, plus three more! Some alcohol flavors can compliment coffee, which is where these recipes come in to play.

As fun as it may be to make a strong drink, be sure not to overdo it considering the mix of caffeine and alcohol. We cannot condone drinking these drinks to start your night, but rather be your one-and-done drink.

Although you need to be careful about consuming caffeine with alcohol, there is something to be said about having coffee to soothe your hangover. We are not condoning drinking so much that a hangover happens, but sometimes it happens without you even drinking a lot. That’s on you. Coffee is here to help with curing that hangover.

Maybe don’t go using this trick if you usually do not drink coffee, but if you typically drink coffee, there is no reason to avoid it. There are studies to show that consuming coffee is a good option. Just be sure to accompany the coffee with water and painkillers!

Thanks for reading up on the effects of mixing caffeine and alcohol. From starting your night out to the recovery the next day, we covered all of the bases. When alcohol is concerned, it is always better to be safe than sorry.

Check out our Pinterest to what other recipes we find for responsible coffee cocktails! If you want in all exclusive coffee-related conversations, check out your private facebook group at Daily Coffee Talk. Drink responsibly! We’ll brew ya later!! ☕️ 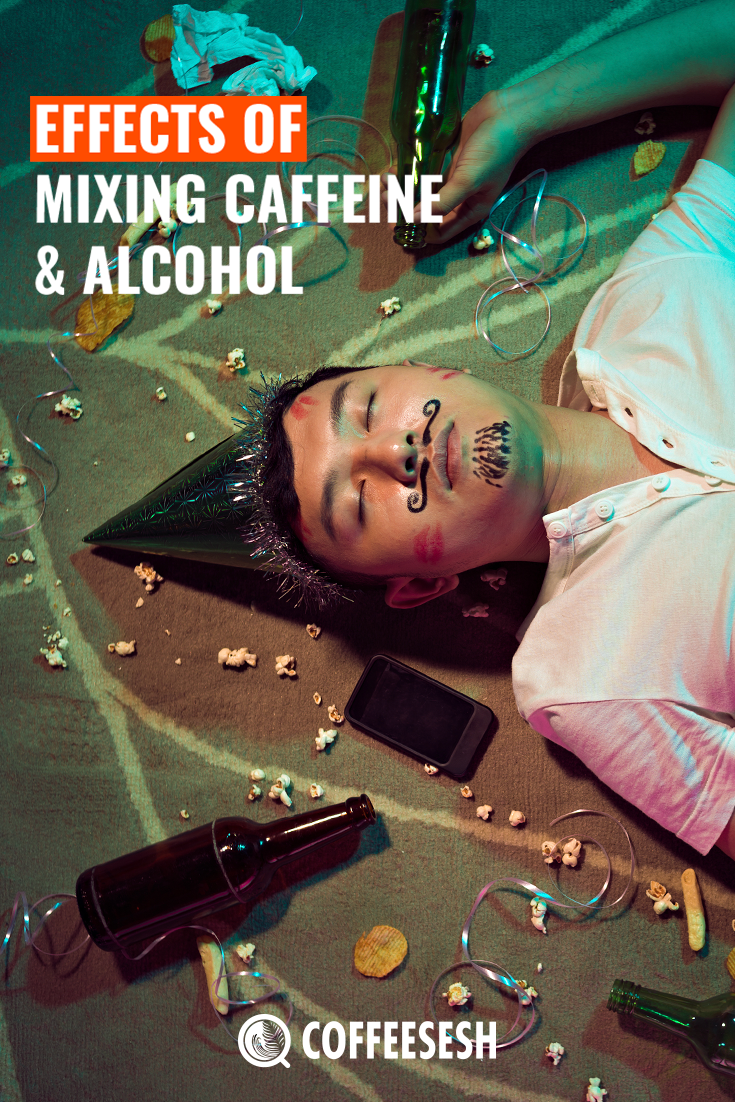 Where Does Coffee Come From?

Paper Vs Metal Coffee Filter: Which One Is Better For You?