It’s nighttime and you’ve had a few cups of coffee today, but you still have a coffee craving! You’re not one of those people who can drink regular coffee at night and fall asleep just fine, so you reach for some decaf and brew a cup in your favorite coffee mug.

A few hours later, you can’t fall asleep, and you’re scratching your head wondering why! Was it that scary movie you watched? That snack you had before bed? The coffee?

No, that can’t be… decaf coffee doesn’t have caffeine in it! Right?

Well actually, my friends, decaf coffee does have some caffeine in it. If you want to know how much, then keep on reading!

Luckily we can still estimate how much caffeine is in decaf coffee using the info we have on regular coffee. An eight ounce cup of regular coffee might have anywhere from 70 to 200 mg of caffeine, depending on the brand and type of coffee beans used.

Decaffeinated coffees need to have 97% of their caffeine removed to comply with FDA standards. So based on the numbers we have on regular coffee, an eight ounce decaf cup might contain anywhere from 2 to 6 mg of caffeine, and a sixteen ounce cup could have 4 to 12 mg.

That’s a pretty negligible amount, right? So why is decaf coffee keeping you up?

In recent years, a few studies have been done on popular decaf drinks from places like Starbucks and Dunkin’ Donuts. Researchers wanted to test the amount of caffeine in them to see how much coffee decaf drinks have on average. The results of these studies show that decaf coffee contains very inconsistent levels of caffeine!

When researchers tested ten decaffeinated espresso samples from Starbucks, they contained a range of 3 to 15.8 mg of caffeine. That’s a huge difference!

Most Starbucks espresso drinks contain two shots, so if you order a decaf latte, you could be drinking as much as 28 mg of caffeine!

Another study by Consumer Reports found pretty high levels of caffeine in the decaf drinks at some chains. They tested 10 to 12 ounce decaf coffees from six popular establishments. Most of the coffees had less than 5 mg of caffeine, but some clocked in a lot higher.

What does this mean?

If you’re not sensitive to caffeine, this may not sound like a big deal. But if caffeine keeps you up at night or gives you heartburn and digestive distress, then having 30 mg of caffeine can really ruin your day.

So why does decaf coffee have such inconsistent levels of caffeine, and how can you make sure your cup of decaf doesn’t contain too much of it?

The decaffeination process, which usually involves rinsing the coffee beans with a solvent like ethyl acetate, isn’t the only thing that affects the caffeine levels in your decaf coffee.

What type of beans are in your coffee and how they’re brewed will affect the caffeine content, too.

There are two different types of coffee beans—robusta and arabica. Robusta beans have more than double the caffeine of arabica beans. So decaf coffees containing mainly robusta beans usually have more caffeine.

The brewing method you use, the brewing time, the temperature of the water, and the grind size of the coffee beans all affect how much caffeine is extracted from the coffee.

Water temperatures affect the caffeine level in your coffee the most. Higher temperatures yield higher extractions, which increases the amount of caffeine in your drink. That could be a good or bad thing depending on your preferences!

The grind size of the beans affects caffeine levels, too. Finely ground coffee beans extract more quickly than coarse grinds because they have more surface area exposed to the water. So if you use finer grinds, more caffeine will end up in your coffee.

The brewing method and brewing time also make a big difference. Brewing methods that really immerse the grinds in water, like pour overs, increase the amount of caffeine extracted from the beans. Longer brewing times have the same effect.

How to Make Sure Your Decaf is Decaffeinated

Since preparation has so much to do with caffeine content, it’s easy to see how caffeine levels vary so much from cup to cup at coffee chains. Making it yourself at home the same way each time will ensure a more consistent level of caffeine.

Unless labeling regulations change, you probably won’t be able to figure out exactly how much caffeine is in your cup of decaf coffee. But try to experiment with different brands, types of coffee beans, and brewing methods and see how you feel.

If you’re sensitive to caffeine and you’re still having symptoms like insomnia, that’s a sign that there’s still too much caffeine in your decaf coffee. You might have to change coffee brands, change brewing methods or times, or reduce the serving size of your coffee so you know for sure you’re drinking less caffeine. 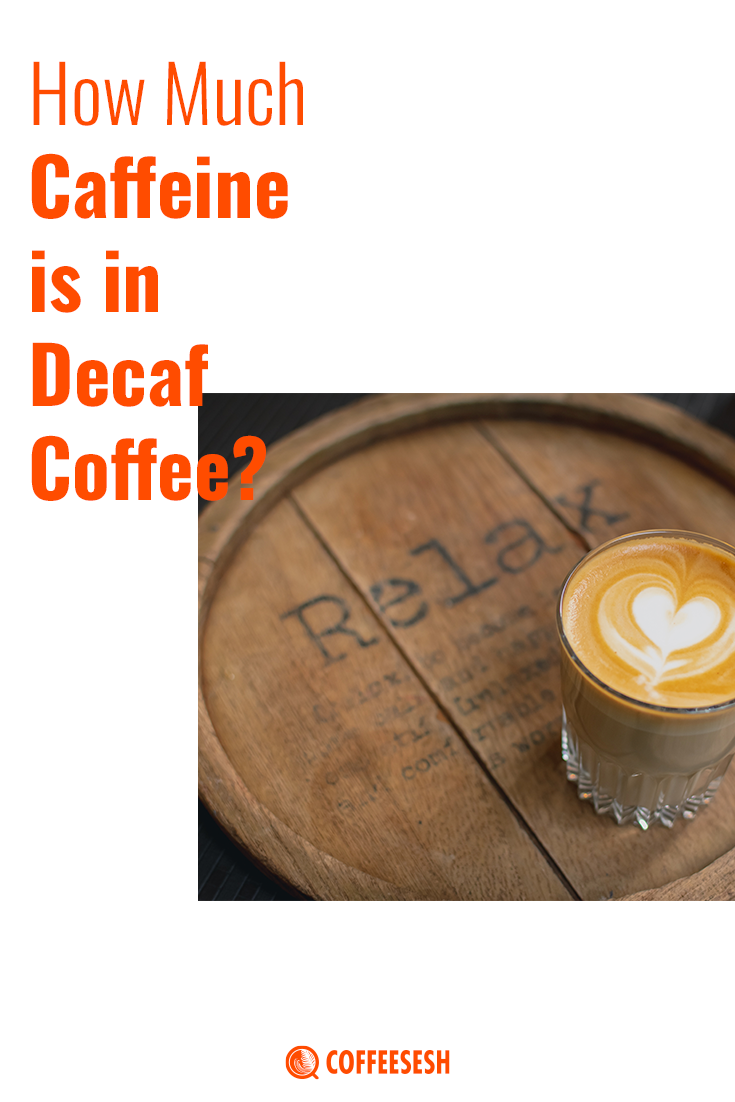 All You Need to Know About Acidity and Coffee

The Best Shade of Coffee For You

Coffee and Health: Why is Caffeine Bad During Pregnancy?