Caffeine is the sweet nectar of wakefulness, the elixir of all early morning risers, the wonderful substance that brings people like us together especially by taking a cup of coffee.

We’d like to take some time to understand why caffeine is so popular. Caffeine affects both your mind and your body in a positive way at low and moderate doses. However, at high doses, it can cause some rather unpleasant effects.

These changes occur at normal doses.

Aside from all of this, caffeine reduces the burden that tiredness and sleepiness can put on your ability to concentrate and perform tasks. It has been demonstrated that a person who’s consumed caffeine does much better under these conditions than someone who’s not had any.

Caffeine classifies as a performance-enhancing drug, which means that, by drinking caffeine, your body will respond better and faster, as well as recover from exhaustion in less time.

Because of all of these beneficial effects, plus the feelings of alertness and well-being that caffeine causes, it is the most widely consumed drug in the world. The toxic amount of caffeine is a whopping 10 grams, which is nearly impossible for anyone to consume unless they are eating powdered coffee.

While some energy drinks can seem to have less caffeine than your usual cup of coffee, we recommend sticking to coffee. It’s natural and safe. Energy drinks have a lot of other ingredients that may interact with caffeine, amplifying its effects on your mind and, more importantly, your body.

The daily recommended amount of caffeine per day is, according to most US standards, around 500 milligrams. But most avid coffee drinkers go beyond that amount of caffeine. Have you ever had someone tell you you’ve had too much coffee? They might be right.

Be sure to also check out “5 Reasons Caffeine Doesn’t Work For You” for info on why maybe caffeine doesn’t affect you like others.

Adverse Effects of Caffeine On Your Mind

The Physical Effects of Caffeine

In regular coffee consumers, there’s a development of tolerance. This means that either they won’t feel psychological and physical effects as much or that they won’t even set in at all.

On the other hand, there’s also a caffeine addiction. And let’s face it: we’re all, to some extent, addicted to caffeine. Just try going a couple of days without caffeine.

But don’t worry; words like “addiction” and “withdrawal” have a certain (bad) connotation to them, but caffeine isn’t evil like other drugs. Caffeine addiction is, in most cases, mild, and so is caffeine withdrawal. You’ll get cranky for a couple of days, but that’s about all of it.

Many foods contain caffeine too. Coffee is known to boost flavor in many foods, chocolate, and cocoa in particular.

Caffeine is most commonly found in darker variations of chocolate bars. Famous brands have about 30 mg per serving, while sweeter chocolate bars have less than half that amount.

Many brands of ice cream use caffeine to boost ingredient flavor, particularly liquor flavors and chocolate flavors. Popular brands have around 20 to 40 mg of caffeine per serving.

While caffeine pills are sold advertising it as a weight loss aid, there is little evidence that caffeine by itself can help you lose weight.

Caffeine does, however, cause vasoconstriction, which helps reduce the sensation of pain. This is why a lot of common headache meds have up to 60 milligrams of caffeine per pill. Sometimes it’s better to have a delicious cup of coffee to cure your hangover, though.

Thank you for reading about different kinds of drinks and how much caffeine is in them. Let us know in the comments below how your caffeine intake is daily. How many cups of coffee do you drink daily?

Be sure to check out more info on caffeine in “How Much Caffeine is in Instant Coffee?” or “Why is Caffeine Bad During Pregnancy“. 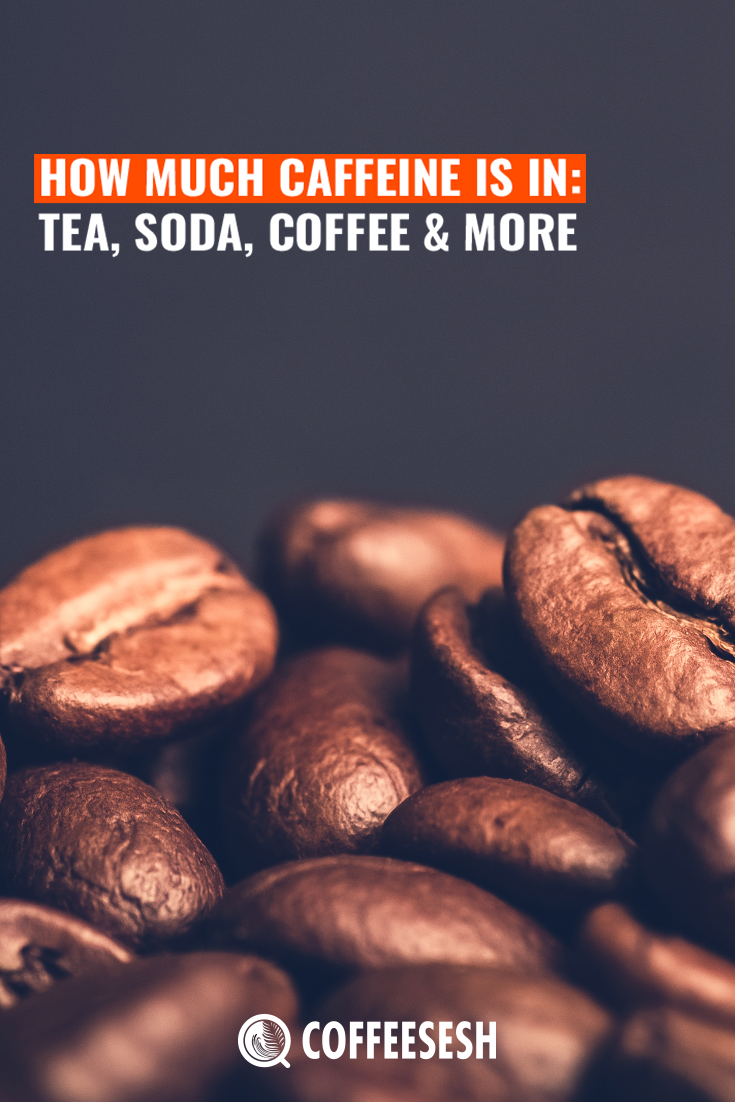 The 7 Important Mushroom Coffee Benefits To A User