Just about the only thing separating lattes, flat whites, and cappuccinos is the frothing (otherwise called foaming or steaming) of the milk. Flat whites have zero foam, lattes have some, and cappuccinos reign supreme in foam.

Although not a common request, a “dry” cappuccino means load up the foam. It’s also common to sprinkle some cinnamon or chocolate on top of a cappuccino, while lattes are the ones more commonly loaded with flavor pumps from syrup.

To learn more about the differences between lattes and cappuccinos here. They are siblings in the coffee world with differences big enough to mean it’s time to pay attention to just how you should be getting that cappuccino foam!

Here’s a step-by-step to getting perfectly frothed milk for a cappuccino.

1. Grab Your Clean Pitcher from the Fridge

Having a cold pitcher is both more sanitary and better for the steaming process. It’s important to remember that the milk increases in volume when it’s foamed, so be sure to choose a pitcher that will still have space for the milk once it is all foamed up. Hopefully the barista before you, or your partner if you’re doing this at home, cleaned the pitcher properly so that you can get started right away.

Part of the glory of a cappuccino is its size! Contrary to the offerings at a lot of large coffee chains, a standard cap is normally around 8 ounces. This means that there is no need to steam extra milk that will just end up being wasted—especially if it’s some of that pricey almond or oat milk.

A small amount of milk to steam is also helpful to make sure that when you pour the milk out of the pitcher, it is not just the non-foam part.

It’s important to have your shot ready in the given cup or mug before you steam the milk so that you can pour the milk quickly before the foam settles. Real pros can steam their milk while their shot pours.

Do you fall in to that category, where’s our pro coffee makers at?

This, cleaning and emptying the steam wand, will also be the after every drink as well, because the milk is just waiting to crust over that precious steam wand. That makes for a gross appliance — and potentially even a damaged one.

No need for crusty milk flakes in our lattes or cappuccinos… or even worse, a crazy amount of money to replace the device or machine.

5. Put the Steamer into the Pitcher and Go Full Steam Ahead

At this point, you could get picky with the angle in which you are holding the pitcher or the exact temperature of the milk—that comes down to barista preference. You can still get an amazing Cappuccino with or without that kind of precision. Turn the steam to full power, or else you’ll get some crazy bubbles.

6. Lower the Pitcher in Order to Froth the Milk for More Foam

Lowering the pitcher brings the steam wand more to the top of the milk, where the steamer creates a sound similar to paper tearing.

Raise the pitcher if the bubbles get too big, but at the proper height the milk visibly grows as it foams. Keep in mind that if you are using milk alternatives (oat, coconut, almond, cashew, etc.), the milk may react differently to the steam. It is not a huge difference, but pay extra attention if you are using a new option.

7. Raise the Pitcher in Order to let the Steam Heat the Milk

Once you are happy with how much foam you’ve got, you’ll want to avoid going overboard. It’s time to raise the pitcher, allowing the steamer to simply heat the milk.

While one hand holds the handle of the pitcher and adjusts it as you see fit, use the other to feel the temperature of the milk on the side of the pitcher. If you want to be super precise, try using this coffee thermometer! Cappuccinos are best when the milk is a little sweet, so try your best not to over steam the milk because that makes it less sweet.

Once the pitcher starts to feel too hot to touch, your milk is ready to join the espresso and become a perfect cappuccino.

This allows for the foam to stay on top, rather than being pushed to the bottom in a slow pour. Cappuccinos are not the time to put your latte art skills to the test but rather to just get the job done.

It’s time for that sprinkle of Sugar In The Raw, chocolate, or cinnamon on top (all solid options). A great cappuccino can also be enjoyed as is! Cappuccinos have lost their magic in the sense that some people think they can be iced (That’s just an iced latte if we are being honest with ourselves), but when they’re frothed right—it’s almost magical.

Some coffee machines nowadays come with frothers or steam wands, so you may not even need an entire expensive espresso machine to start practicing.

Thanks for reading our newest article on frothing milk for cappuccinos. Be sure to share and join 80K+ other people following @coffeesesh. If you want to read more, we suggest you take a look at our how to make a latte, it’d go perfect with this skill on how to froth your milk. Also if you want to learn more about making coffee from people just like you, be sure to join our private Facebook group here at Daily Coffee Talk. You’ll be able to learn how to brew, how to roast and most importantly how to enjoy the perfect cup of coffee!

Anyways, we’ll brew ya later! Give us suggestions on what you’d like to read in the future! ☕️ 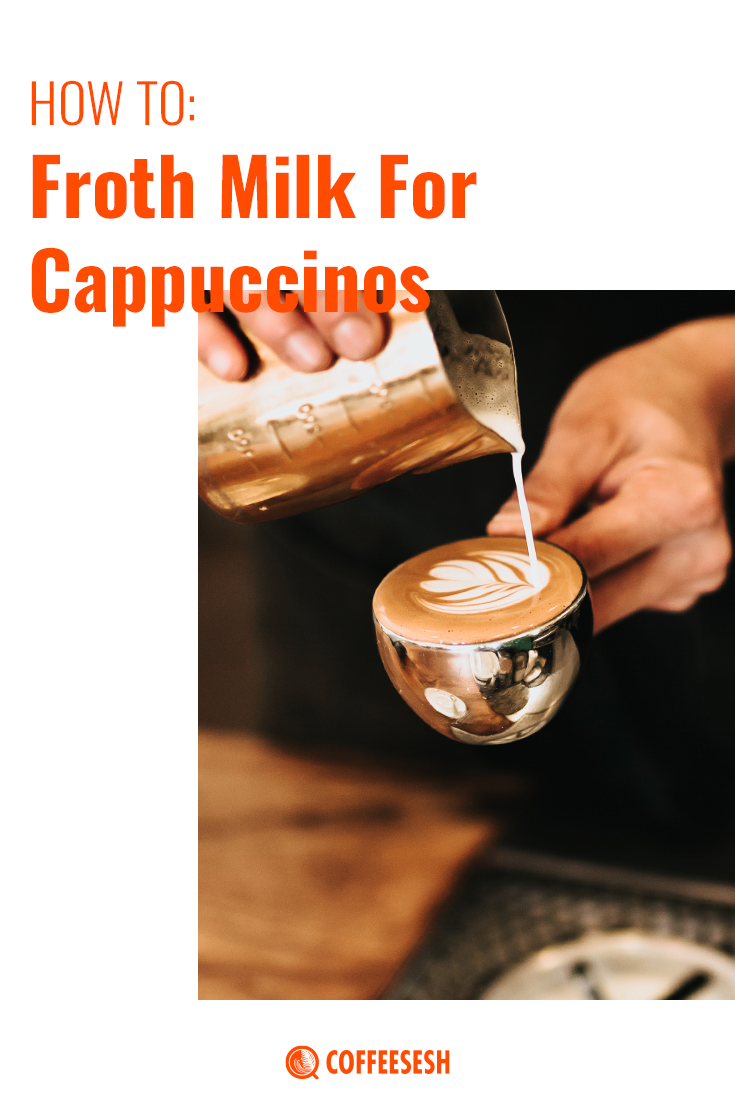 How to Grind Coffee Beans for the Perfect Cup

How to Make Coffee Less Bitter?

How to Make Coffee Taste Good Without Creamer

Learn How to Make Chocolate Covered Coffee Beans with Ease