Asia is predominantly a tea drinking continent; however, it has a long relationship with coffee – deeply rooted in coffee production. The continent produces close to a third of all the coffee in the world, with Vietnam being the second biggest producer after Brazil. Other Asian countries rank in the top ten world producers; notably Indonesia, India and Thailand. When you think of Bali, it’s the scenic beaches, forested mountains and outstanding rice patties immediately come to mind. But, it being home to the ‘world’s most expensive coffee’ wouldn’t as promptly come to mind, right? Much like you would safely bet that only a handful of passionate coffee drinkers can link the ‘Java’ in coffee to the Indonesian island, Java.

It already sounds like you don’t have to sift through much of shaft before you find beans in Asia. Asia’s coffee consumption has been on the rise in the last decade as tea keeps holding resistance. This brings us to the topic of the day; whether you are a native of the continent or a visitor desiring to satisfy some caffeine urges, we’ll save you the struggle of wadding through the rich and dense Asian coffee culture. Our ‘7 Popular Coffee Drinks in Asia’ list should enable you do what you should do best; easily narrow down a choice and enjoy your coffee.

But before jumping right into that, it is important to note that although Asian countries enjoy cultures sewn from the same fabric, there is no ‘Asian Coffee Drink’ in the strict sense of the word Asian. Countries fashion their drinks according to their immediate traditions, yet, most of the popular coffee drinks share the same backgrounds. So while they may go by different names from country to country, you’ll realize that they share more or less the same ingredients and preparation procedures.

We know— that doesn’t sound like a specific popular drink. It isn’t. Coffee drinks fall in categories that emerged from the evolution of coffee. Traditionally, coffee drinks in vast Asia had no much sophistication attached to preparation or consumption. Still, richness of coffee drinks were not taken for granted regardless of the quality of coffee beans; which were generally the Robusta variety combined with other non coffee beans and nuts before being grounded. (Not quite sure Robusta coffee beans are?

To achieve this, grounded coffee would be passed through percolators to create the traditional version of today’s espresso. A typical drip filter is made of a two-compartment cylinder with a sieve base on top. It is on this base that grounded beans are placed, then hot water is passed through to percolate to the second compartment for collection of the resultant decoction. This would then be added with milk and sugar to constitute one of the popular breakfast beverages in many South Eastern households.

In India, the decoction is known as Madras Kaapi, or meter coffee in street slang. In Vietnam, it goes by Ca Phe Trung, made through Phin; the local name for the drip filter system.  In Thailand, the procedure is referred to as a cotton bag or sock filter. It deviates from the general drip filter as coffee is placed in a cotton bag and seeped in boiling water. In Vietnam, the coffee is added to sweetened condensed milk.

This is because at its introduction, Vietnam had an acute shortage of fresh milk. It is enjoyed without sugar. Asia is known for its unique traditions and cultures which remain partly in their original forms, thus drip filter coffee is still popular in both households and street-side cafes.

Again, this is not a drink by itself, but a general category which many coffee drinks fall under.  Like earlier mentioned, coffee culture in Asia follows an evolutionary pattern. At first, coffee users had to make do with what was there, and the immediate need was to have coffee, just coffee. Then coffee became more available and users wanted improvement in taste and experience. There are dozens of specialty coffee crafted for specific consumer preferences, which makes coffee more of a personal affair.

This is significantly boosted by the increase in the who’s who in the coffee chain cafes that are making an entrance in Asia. The Vietnamese Egg Coffee is quite a household name. The egg coffee combination is not only curious and stands out; it also doubles up as a dessert. This odd and unique blend could be the source of its popularity. Its recipe was inspired by the Vietnamese milk shortage whereby egg yolks are used to thicken coffee and make it frothy. It may also be a pointer to Asian appreciation of the next group on this list.

This hosts a group that may also be found in the specialty category. Asian coffee consumers have a tendency to enrich and innovate around coffee drinks. As a result, there are several coffee flavors based on smoothies and shakes. Indonesian Coffee and Avocado Smoothie is a no brainer. Avocado is the fruit equivalent of coffee world over, who doesn’t love avocado?

So the good folks in Asia decided to combine the two, it is no doubt that this combo inevitably is among the most popular of fruity coffee. Another eye-catching fruit combination is banana smoothie. The base of this fruity coffee is basically coffee and any fruit of choice. Inspired to make smoothies now?

It is not uncommon to find green coffee, which is an offshoot of green tea. The Asian communities, especially the Chinese and Japanese are large on healthy drinks, thus, coffee blended in herbs is a common phenomenon.

Asia, especially South Asia, is generally warm and humid. As such, cold drinks are more preferred to hot beverages.  While cold brew coffee has been a sort of an ‘in thing’ around the world, especially the US, ice blended coffee has always been a go to in Asia. Ice blended coffee is a combination of ice, coffee, vanilla/chocolate and milk topped with whipped cream. However, with the advent of ready to drink cold drinks, companies tapped into coffee as well. Consequently, cold ready to drink coffee is quite popular in the region.

Instant coffee from Nescafe is a worldwide brand, speaking to how much convenience is a huge factor driving coffee consumption. This is no exception in Asia. Instant coffees, like this, come readily brewed, granulated and packaged in small and cheap sachets. All one requires is a cup of hot water, and you have a hot steaming cup of coffee on the go. It is no wonder this old, tried and tested coffee treat is a popular specialty.

The Asian coffee consumption landscape is both long and broad. It is also significantly rooted in its traditions which are equally diverse and broad. This is why big-wig chain cafes, such as Starbucks, largely integrate Asian specific recipes to their coffee brands. However, such cafes continue to thrive, thanks to the young generation base that enjoys foreign tastes. Lattes are a common choice. Lattes and Frappuccinos are popular since Asian traditional coffees are generally sweetened. This makes latte an entry into the more exotic western tastes with strong coffee content which may be bitter to some degree for Asians.

One cannot complete an Asian coffee topic without mention of ‘third wave coffee’. As palates keep being satisfied, interests shift from the craft in the brew to the entire coffee chain right from the farms, to the coffee houses. Essentially, third-wave coffee drinks are specialty coffees taken to the next level.

Asia provides a growing, and broad, choice of popular coffee drinks. One can be sure to be spoilt for choice as brands diversify to meet the huge consumer appetite. 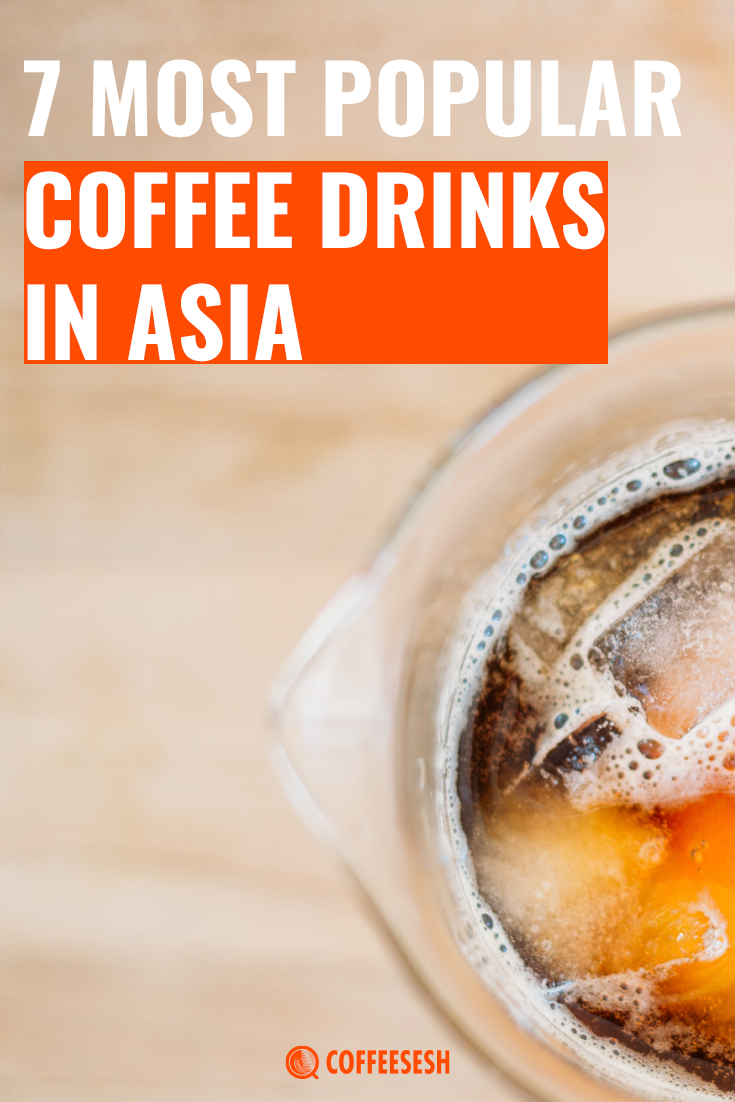 The 3 Best Alcoholic Coffee Drinks You Have to Try