If you were to Google a simple question, ‘what is the most expensive coffee in the world’, the answer to immediately pop up on your screen might be a brand named ‘Kopi Luwak’.

If you were tempted to shut your PC with the satisfaction of adding another piece of trivia to your arsenal of facts, hold up for a moment. Kopi luwak is often wrongly cited as the most expensive coffee one can buy. However, it doesn’t even come close to the actual champion of this list on modern pricing otherwise known as inflation.

The Rarest & Most Expensive Coffee in The World -...
(52)
Check Latest Price

So Which is the Most Expensive Coffee in the World?

Incidentally, the one thing in common between the two coffees is that producing both involves extracting the coffee beans from animal dung. Don’t let this fact stop you from dropping around $500 per pound of Black Ivory coffee. That is the average price of the product in the United States. Kopi Luwak, in comparison, only costs around $160 dollars on average, though prices can fluctuate massively.

Black Ivory coffee is always consumed black, and is sweetened with chocolate instead of sugar. The texture of Black Ivory has been described as being “a cross between coffee and tea”, while it tastes of chocolate malt with a hint of cherry. Review after review commends this brand for being devoid of bitterness. That is why it makes it appealing even to those who do not conventionally consume coffee. Some have also suggested that the coffee retains a fruity aroma while hot, but this disappears on cooling down!

You’re getting the idea of the most expensive coffee in the world. Have you asked yourself What is the Best Tasting Coffee in the World?.

The secret of why Black Ivory is so expensive mainly lies in the process of its production.

First, the finest Arabica coffee beans are picked out from the hills of northern Thailand, which sit at an altitude of about 1500 meters. Then, these beans are mixed with fruit and fed to elephants. Those elephants eventually poop out the coffee beans after semi-digesting them. Lastly, the coffee is processed before distribution.

One significant driver of cost in this type of coffee is the inefficiency of the elephants. It takes around 33 kilograms of cherries for an elephant to poop out half a kilogram of coffee. While this reduces supply, the digestive processes of these elephants are the main reason behind its unique taste. Elephants that are fed Arabica beans are kept on a completely herbivore diet. This helps ferment the coffee beans when they pass through the elephant’s digestive tract. Fermentation brings out the sugar stored in the bean, tempers the bitterness of the coffee, and helps impart the flavor of the fruit to the coffee.

It can take anywhere between one to three days for the elephant to perform its magic on the coffee. Besides fermenting the coffee beans, elephants influence the coffee in one other random way.

Each elephant, like human, prefers to eat different things. This can impart a taste of cherry, tamarind, or something else to the coffee. Blake Dinkin, founder of the Black Ivory Coffee Company, has gone to great lengths to ensure the safety of elephants during the entire process of production. Care was taken to ensure that elephants are not affected by any of the caffeine. The process of caging them is generally avoided.

This ethical consciousness has contributed considerably in promoting the brand and making it more popular. Proceeds from sales are also donated to a charity that raises awareness about elephants.

Where Can I Buy the Most Expensive Coffee in the World?

Unfortunately, Black Ivory is only sold to select five star hotels in Thailand, Maldives, Canada, and Abu Dhabi. One cup will cost you around $50 dollars. Only 150 kilograms of the coffee will be produced in 2019, with the numbers being as low as 50 kilograms in 2012. That is when Black Ivory had recently launched. As such, supply is always minimal and getting the chance to savor this coffee is a true opportunity that only comes once in a lifetime.

The method of brewing Black Ivory was developed in Austria in 1840. The Black Ivory Coffee Company sells its own brewer on its official website, and it is an absolutely gorgeous machine. With an ensemble consisting of flasks and thin metal pipes, it looks like something straight out a chemistry lab. The machine has two chambers, with the filtered side balanced with a counterweight. The mixture is heated at 200 degrees Fahrenheit and gradually allowed to fill up the adjacent chamber without a paper filter to avoid contaminating the coffee. The entire process only takes around five minutes!

Black Ivory is the Most Expensive Coffee in the World

Thus, while the Kopi Luwak was once the most expensive coffee in the world, Black Ivory has overtaken the coffee indigenous to Indonesia. It has benefited commercially from the decline of quality in Luwak coffee due to pressures from excessive demand. Also from some specific procedural alterations.

To produce black ivory coffee, elephants are kept on a 100% herbivore diet. This is not the case with the Asian civet used for Luwak coffee. Dinkin has also consciously endeavored to restrict the size of his business to protect quality, and emphasize on environmentally conservationist practices. With a brewer as beautiful as the one sold by Black Ivory Coffee Company, the entire process makes the drinker feel special and perhaps goes a long way in enhancing the taste of the coffee itself.

Now that you know about the most expensive coffee in the world, do you think you’ll try it? Even if it’s essentially processed by elephant poop?

Feel free to leave a comment below with your thoughts on the most expensive coffee in the world! Also be sure to check related content like “7 Popular Coffee Drinks In Asia”, “What’s the Difference Between Arabica vs Robusta Coffee Beans” or even “What is the Strongest Coffee in the World?”.

If you want to learn more about making coffee from people just like you, be sure to join our private Facebook group here at Daily Coffee Talk. You’ll be able to learn how to brew, how to roast and most importantly how to enjoy the perfect cup of coffee!

That’s it for now, we’ll brew ya later!! 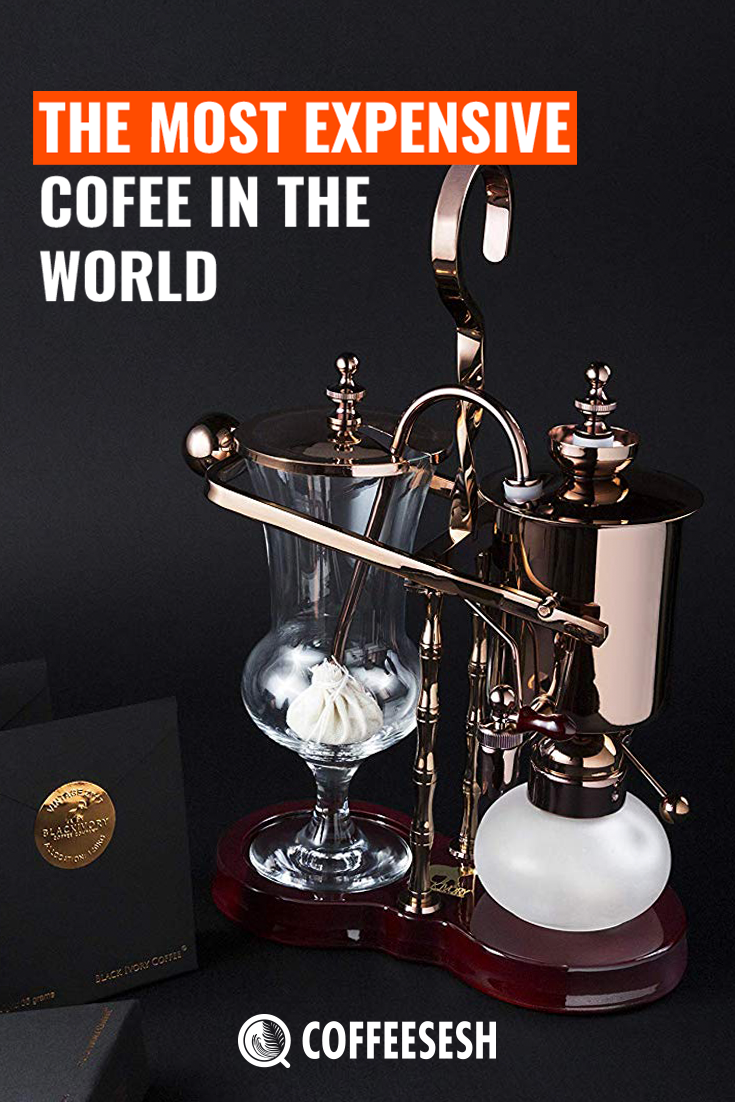 What is Dark Roast Coffee?

Burundi Coffee: Everything You Need to Know

What is the Best Light Roast Coffee?