Siphon coffee has been a popular way of preparing coffee across Europe since around the mid 19th century. At the time, coffee wasn’t meant to be prepared in your kitchen, but in front of your guests as a spectacle that would act as a great icebreaker. How interesting is that?

If you’ve seen a coffee siphon maker, you know exactly what we’re talking about. It’s vintage, and unique look immediately takes one back a couple of hundred years. But this machine doesn’t just look pretty, it produces some of the best coffee any machine, or human can make.

Even the best cafes across the world use siphon coffee as their trademark beverage, but preparing a cup for yourself in the comfort of your home is also a luxury that you can easily afford.

This article will help you understand everything you need to know about brewing siphon coffee and all the various benefits of doing so. Its distinct flavor and texture come from a time when coffeemakers were experimenting with different brewing methods to explore the diverse palate of coffee. Besides the coffee itself, preparing siphon coffee is an aesthetic pleasure in itself, and provides the appropriate sensory stimulus that enhances the taste of coffee in many subtle ways.

How Do I Make Siphon Coffee?

Siphon coffee enhances the flavor of coffee in two distinct ways, but before understanding this, we need to go over how exactly the mechanism of a siphon coffee maker works.

The main set up consists of two round glass containers, wherein the top one has a nozzle or ‘siphon’ attached that helps it fit with the lower vessel. This siphon can be made from various elements such as stainless steel, paper, glass, and cloth. They all have their pros and cons, and it might be worth looking them up before making a purchase. Moving on, the two containers are also bound by a metal encasing that extends into a handle.

First, water is added and continuously heated in the lower vessel. Once it starts producing water vapor, the top container is attached to the bottom one, and the steam forces water upward. Once enough water has collected in the top container, ground coffee is added so that the water thoroughly permeates the beans and extracts its flavors. The coffee and water mixture eventually travels back to the lower container. Once this is done, the coffee is ready to be consumed after being allowed to rest for a few minutes.

There are two types of siphon coffee makers you can buy: stovetop and standalone designs. As the names suggest, the main difference between the two rests on whether the coffeemaker requires heat from a stove, or has an independent mechanism for heat control. The latter are often more expensive, but the former can take away some of the charms of preparing siphon coffee, so make your pick wisely.

Two assumptions have commonly been made when it comes to siphoning coffee, neither of which are necessarily true. Firstly, it was believed that finely ground coffee, as is used in siphon coffeemakers, producers a better cup of coffee. This is incorrect since finely ground coffee loses its flavor faster.

Secondly, it is mistakenly assumed that siphon coffee makers allow grounds to come in contact with boiling water, which ruins the flavor of the coffee. However, this is untrue, since the actual temperature is usually close to boiling, but not as high to damage the sugars of coffee beans.

Reasons To Use The Siphon Coffee Method

Coming back to the two benefits of preparing coffee in this way, two critical parts of the siphon coffee making process distinguish it from other procedures, like pour-over or french pressed coffee. The first, relating to the second assumption mentioned before, is the mixing of fine coffee grounds with warm water.

While finely ground coffee leads to carbon dioxide escaping the beans rapidly, immersing coffee in the top container helps the water completely penetrate the insides of the beans to extract all its sugars and flavors. After this, when the coffee and water mixture is taken to the lower vessel by gravity, the step where the benefits of vacuum brewing come into play. It further helps the flavors to be scrounged from the beans. Furthermore, it also enhances the aroma of your coffee, helping every distinct note to percolate through.

There are other benefits to adopting this method as well. Most others require you to use pre-heated water, but in siphon coffee makers, the water is heated throughout the process. This results in an even consistency that is the hallmark of siphon coffee. Some have described this to resemble the texture of tea. Depending on how big your coffeemaker is, it can often be more comfortable to produce bigger batches in a siphon coffee maker compared to other methods.

This coffee is often on the subtler side of coffee. Its taste is refined and sharp in its strong flavor, yet accommodating of the various notes of the bean it was made from. It has a light, tea-like consistency, but it is certainly a mouthful! Other methods, such as the french press, often produce oilier coffee that can have one flavor overwhelming the rest.

A big part of the delight in siphon coffee is the process of making it. The use of halogen lamps instead of butane burners and pyrex containers can make you feel much more involved in the process of producing coffee. However, this can also be the result of confusion for some, but our description should indicate that the process is quite simple.

Drawbacks To the Siphon Coffee Makers

Besides any shift motivated by taste preferences, there are few drawbacks of using siphon coffee makers at home. Perhaps one worth mentioning is that the cost of parts can add up if you buy higher quality instruments. These parts will likely also take longer to clean than if you were using other procedures.

Another common complaint is that sometimes the siphon coffee ends up tasting bitter. To resolve this, try grinding your beans more coarsely next time. The loss of carbon dioxide and flavor, that results from overly fine grinding, is the culprit for the bitter taste. Also, make sure that you do not let your coffee rest for too long.

If you’re looking for the coolest way to prepare coffee around a group of your colleagues, or friends and family, look no further than siphon coffee makers. They are stylish and can produce some great coffee in large quantities.

Using a siphon coffeemaker is reasonably straightforward, but if you’re not careful while shopping, you could end up with a bill that is bigger than you expected. But besides that, siphon coffeemakers are well designed to extract the natural flavors and sugars of all types of coffee beans, all while being an entertaining spectacle for guests, as well as hosts. 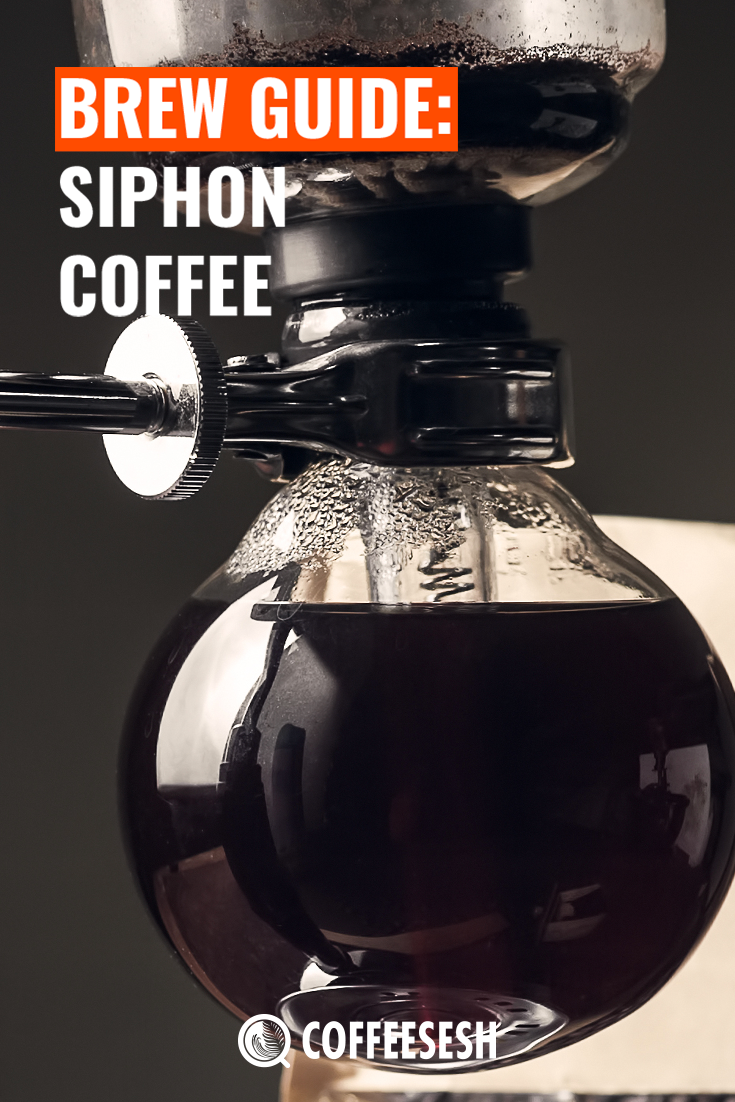 How To Prepare Aeropress Coffee

What is Third Wave Coffee?

What is Nitro Cold Brew